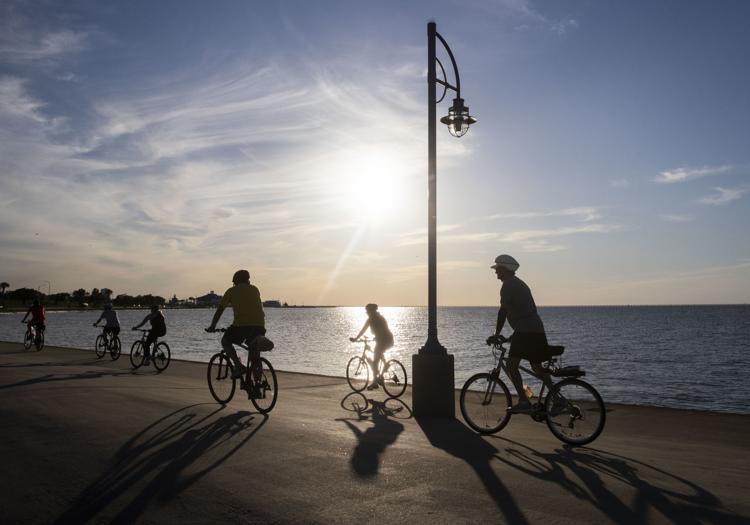 Contractors began painting bike lanes on both sides of Newton Street in Algiers this week, and they’re expected to create 11 miles of bikeways in Algiers by the end of June.

The new bike lane will run from Elmira to Behrman avenues and marks the kickoff for a citywide expansion of bike infrastructure. The goal is to create 75 miles of bikeways over the next two years, which will include new bike lanes, added protection to existing bike lanes and the construction of bike trails. The street modifications will be made alongside road repairs.

The city held two rounds of public meetings last year to seek input on the projects. The initiative will first take shape in Algiers because of the positive feedback the city received about projects there and to improve equity, said Laura Bryan, the Director of the Mayor’s Office of Transportation.

“The goal is give people options and choices that are safe,” she said. “We’re not just building for cars. We’re building for people.”

The Newton Street project cost about $377,000. Contractors for the project include Pavement Markings, LLC, and Hard Rock Construction, LLC. The next phase of projects will take place in the Marigny, followed by projects in Central City.

“As we move through COVID-19, there are some things that we’re going to continue to elevate and that includes pedestrian ways of life,” she said.

New Orleans joined other cities in experimenting with giving more space to pedestrian and bike traffic during the stay at home order. During the last two weeks of the order, the downtown side of Moss Street along Bayou St. John — between Lafitte and Esplanade avenues — was limited to local traffic and emergency vehicles only.

The majority of those who took a survey about the partial street closure supported the measure, Bryan said.

An analysis by the University of New Orleans Transportation Institute found that New Orleans has been part of the “bicycle boom” seen across the country. Not only did bike sales increase, but electronic traffic counters have seen record breaking numbers of bike ridership around the city.

There’s been an increase of 255% on the Wisner Trail along City Park since early March, according to the institute. And ridership on the Esplanade Avenue bike lane has gone up 52% from 2017.

A traffic counter on Baronne Street has seen a reduction in bike travel, though researchers attributed that to a reduction in work travel because of the stay at home order.

“While the data clearly suggests fewer people are biking to work, there are new patterns of riding during the shutdown and more people using trails and bikeways overall, said Tara Tolford, a research associate at UNO Transportation Institute. “It appears that many people are discovering or rediscovering the bicycle during this time of significantly disrupted travel behaviors and traffic patterns.”