Learn about the city’s new proposed bike infrastructure improvements and what it means for you. 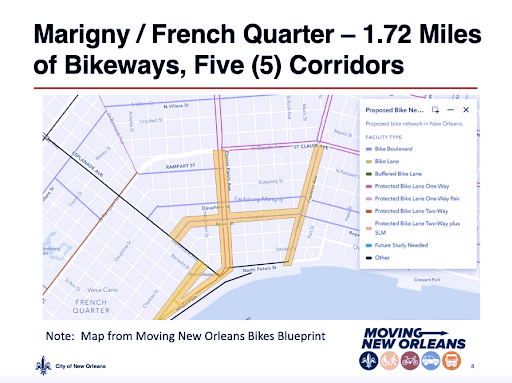 There’s a lot to be excited about with the upcoming improvements to New Orleans’s streets.

But what exactly are the new bike infrastructure improvements? How do they make our streets safer and more enjoyable for everyone? And do we properly use them to keep ourselves and others safe and focused on enjoying the ride?

Let’s take a closer look at some of the new proposed bike infrastructure elements and how to make use of them so we can make our streets safer for everyone. 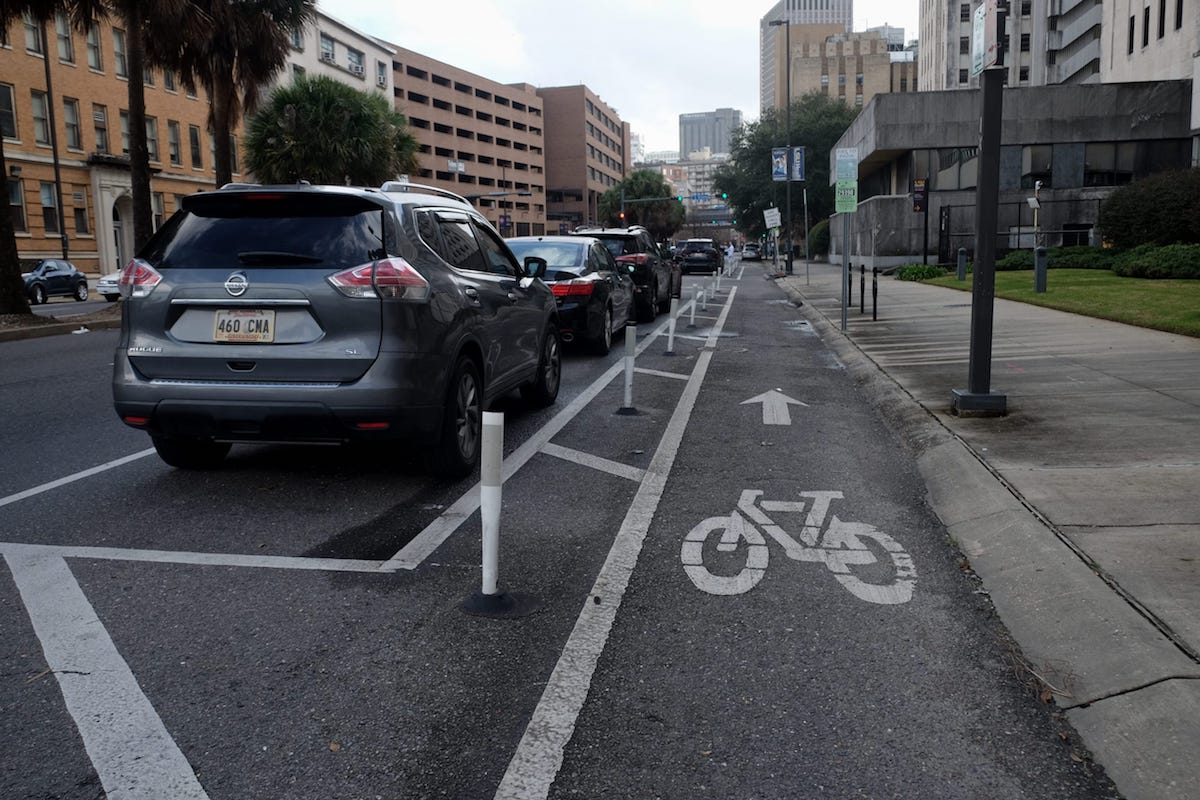 Protected bike lanes have a physical barrier between motor vehicle traffic and people on bikes. A 13-year study of a dozen cities found that protected bike lanes led to a drastic decline in fatalities for all users of the road. According to the National Association of City Transportation Officials (NACTO), benefits of these one-way protected lanes include:

What do parking-protected bike lanes mean for you? 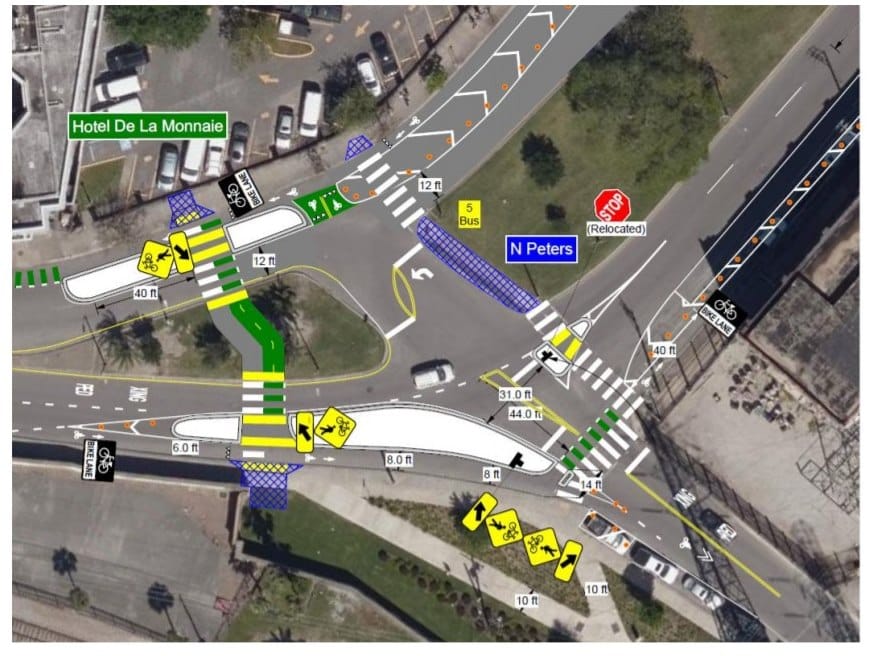 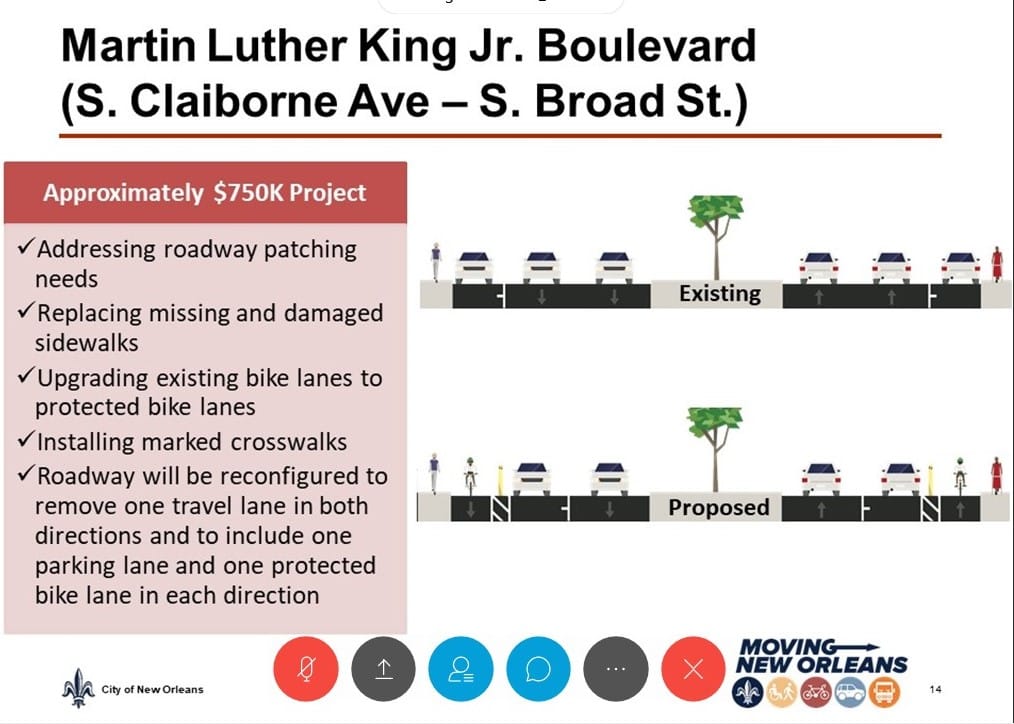 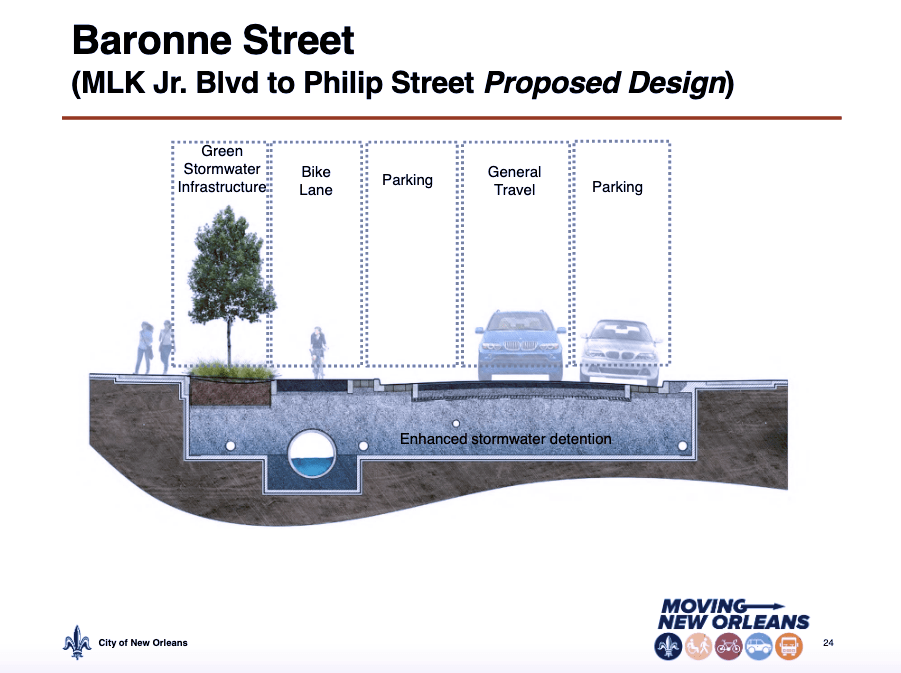 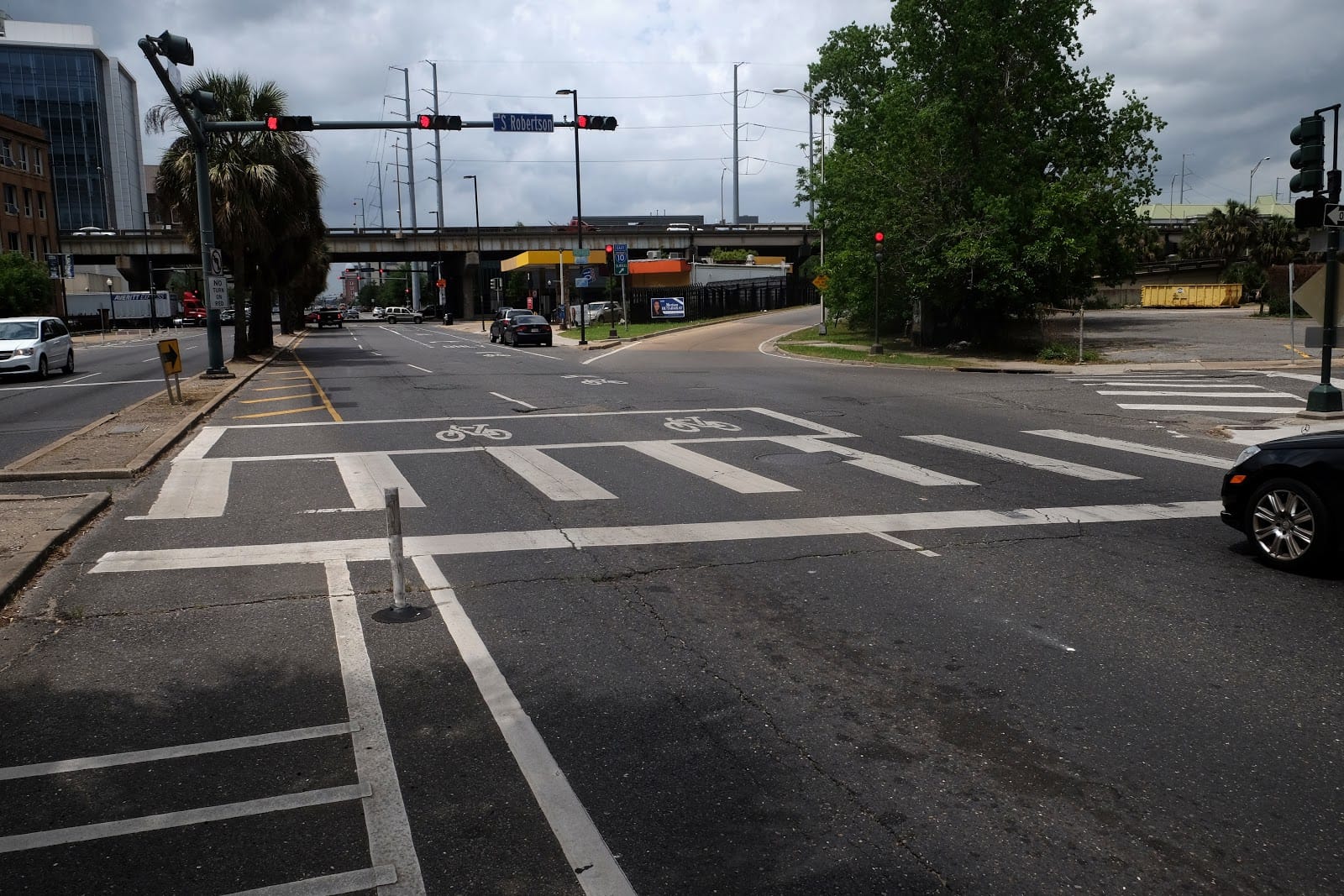 A bike box helps people on bikes move through a tricky intersection with cars entering an on-ramp at Tulane Ave. and N. Robertson.

A “bike box”, also known as an advanced stop line, creates a space for bicycles to stop ahead of cars at intersections with traffic signals. People on bikes are more visible to cars and trucks when positioned in this location. They are less likely to be missed by right-turning vehicles. Research by the Portland State University showed that bike boxes reduced conflict between cyclists and cars, increased yielding behavior, and made both people driving and biking feel safer. 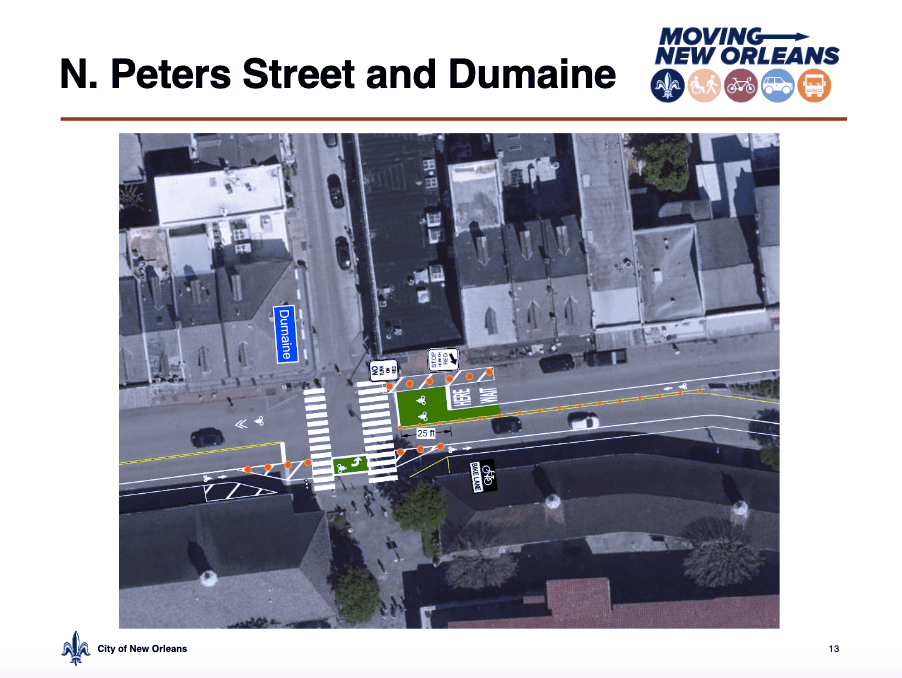 A bike box and marked pedestrian crosswalks are proposed for the intersection at N. Peters and Dumaine St.

What do bike boxes mean for you?

When biking:
Use the box! Position yourself ahead of automobile traffic to get a head start when the light turns green and be visible to the cars directly behind you. Safely make a turn or move ahead to position yourself safely in the lane of traffic on the next block with reduced risk of being cut off by a turning car.

When driving:
At a signalized intersection, stop behind the solid line – don’t block the box! By allowing people on bikes to proceed first, conflicts between people biking and people driving will be greatly reduced.
Be aware – a person biking may start to enter a bike box just as a light changes, yield and give them time to accelerate towards their intended destination of travel. A person biking into the bike box may be hidden from view behind a truck or large vehicle in the right lane. 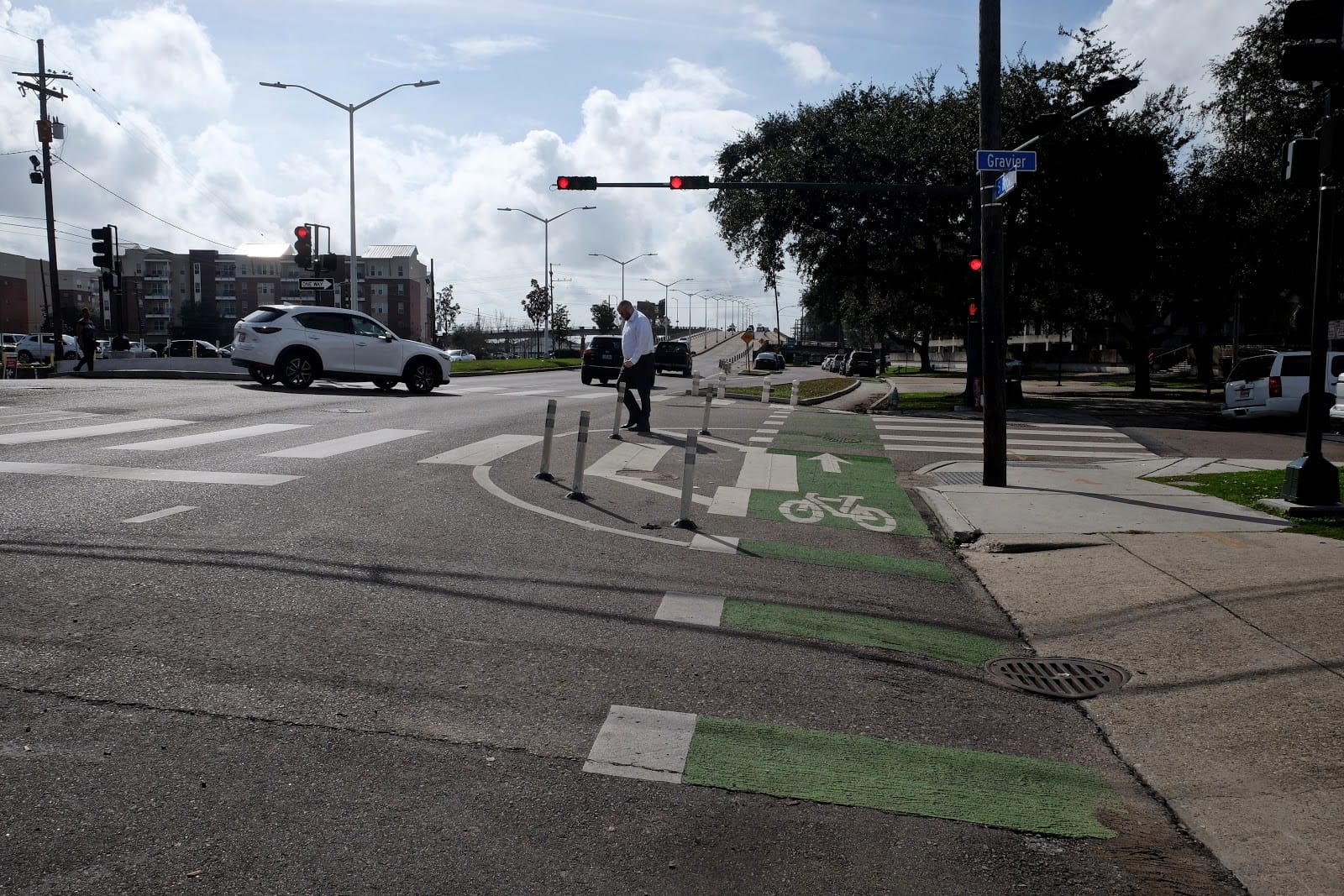 According to NACTO, colored pavement within a bicycle lane increases the visibility of the facility, identifies potential areas of conflict, and reinforces priority to bicyclists in conflict areas and in areas with pressure for illegal parking. Benefits of painted lanes include: 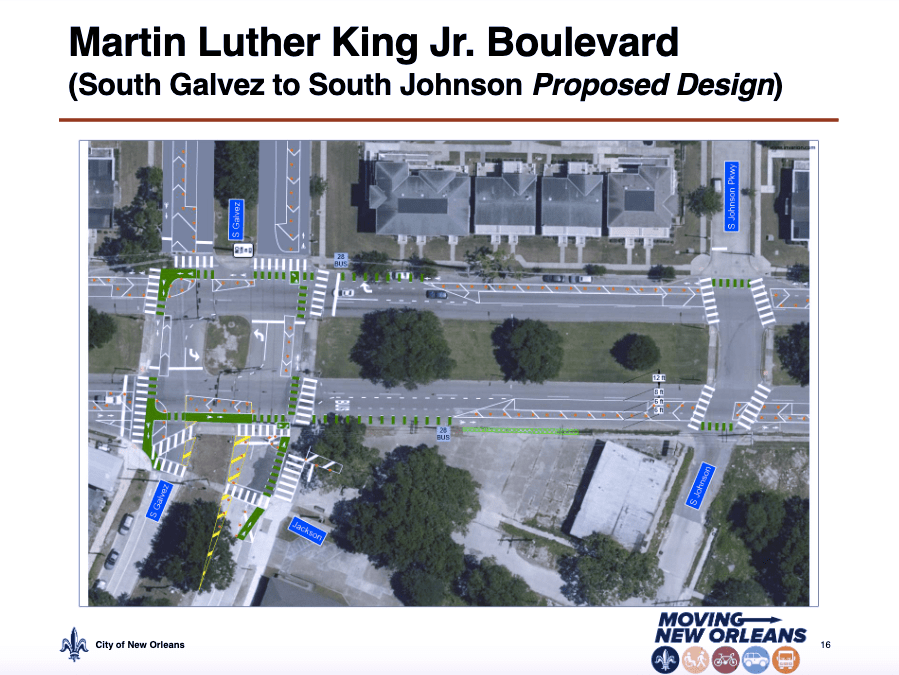 What do colored bike lanes mean for you?

Want to learn more about different types of bike infrastructure? Check out our Virtual Bike Infrastructure Workshop Tuesday, July 28 at 6:00 PM. Click here for more info and to RSVP.

Want to learn more about keeping people on bikes safe while driving? Sign up for our People Friendly Driving Class to learn about common crashes and how to avoid them, safety tips and techniques, and how to navigate bicycle infrastructure on the roadways. Students who complete the class will be awarded a People Friendly Driver Certificate and window decal and become eligible for complimentary Bike Easy membership.